Hello Friends! With the COVID-19 lurking around and people being asked to self isolate I thought this would be a good time to get  caught up on 2DogsTravel.
Since finding this bugger

Thanksgiving and Christmas were uneventfull except for the morning lows in the mid-20s for a week between Christmas and New Years. Another reason to be thankful that I have a warm(er) place to hunker down in the Arizona Winter.
Welcoming in 2020 we were delighted with this fabulous sunset 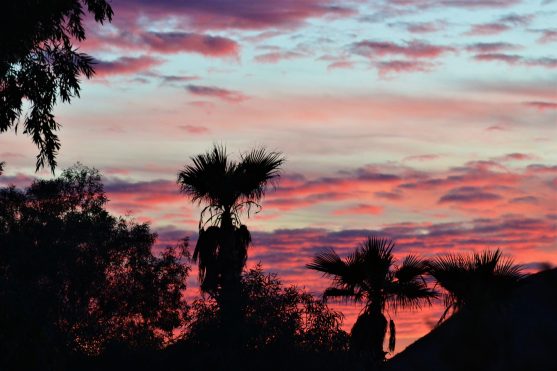 Gotta love Arizona sunsets.
Late January brought news that my SIL, Karen, had been hospitalized diagnosed with myeloma. That on top of diabetes and Parkinson’s. To her credit she had agreed to the bone marrow testing; she is not one who can handle much pain so this really surprised me. She had lived with her sister in Oregon for the past two years since my brother passed, and Sharon was her primary care giver. I  will be eternally grateful for this.

To make a long agonizing story shorter, she was finally sent home. Weak, discouraged, and with the knowledge that she would be taking chemo for the rest of whatever her life span would be, Karen decided that the treatments, constant doctor’s appointments, and continual tests were too much. She decided to let nature take its course and requested that all her meds to be withheld including her diabetes medications.  That, of course, put her into a diabetic coma and in less than two days she was released from her torment and went home to be with her Lord.
Ten days later I got a call from my niece that it was time to come say goodbye to my sister. Edie had been in rehab, again, to try and get her up and walking after yet another hospitalization in December. She came down with pneumonia on top of her CHF, years with COPD, and several bouts with sepsis. She continued to decline in hospital and come to the point of not being able to swallow amongst other various ailments. The doctors said she would never make it out of hospital and she didn’t.
I made the fastest trip ever to California (Hey, I could still be a truck driver if I wanted to . . . at least for a couple of days!).

One of us was with her 24/7 until she took her last breath at 9:30 a.m. February 27th. I stayed for a couple more days to help as I could and to visit with my sons before making a mad dash for Arizona before an incoming storm arrived.

The Chiweenie Brothers and I didn’t quite make it ahead of the storm and it was a snowy drive higher up on Hwy 44 near Lassen Park, but we came out the other side just fine and didn’t hit snow again until near Mammoth Lakes on Hwy 395 where the worst of this section of the highway was starting, but it wasn’t too bad.

Some shots taken with my phone on the trip back. 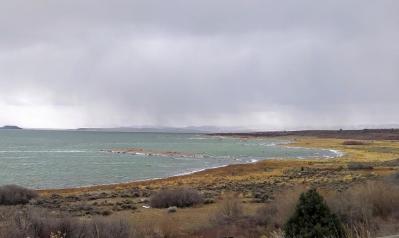 MONO LAKE
The halfway point in our trip is right about Lone Pine, CA Where we spent a very brutal, cold night in the Alabama Hills. The wind coming off Mt. Whitney and surrounding Sierra Nevada made it feel like my hands were going to fall off and permanent grimace left on my face when we got parked for the night and The Boys needed their evening potty walk. I was so glad to have dug through a couple of my storage bins while in Redding and had brought my sleeping bag back with me.

A cold-but-windless morning presented a beautiful dawn creeping over the horizon. 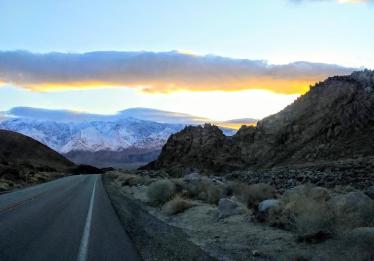 And this interesting little dinosaur, eh? 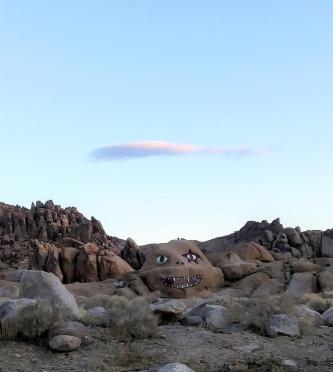 A stop at McD’s for coffee and The Chiweenie Brothers and I head for the barn. I was  feeling a bit off, but was determined to get back to our little desert hideaway.

Back in Arizona The Boys relax after racing around their tiny back yard trying to get some of that pent up energy burned off. 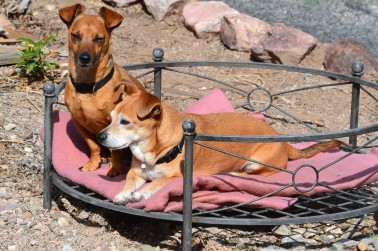 I am totally exhausted and don’t even bother with unpacking the car.

Thank you for stopping by 2DogsTravel. Hugs, Shawna