While I patiently (cough, cough) wait for news that the new generator has arrived, the Chiweenie Brothers and I are up early each morning for a walkabout. Just before the sun peaks over the horizon is just about right. The park is just three miles from the Mexico/US border and being farther south is a wee bit warmer.  UGH!

Pancho Villa isn’t just a pretty park, it’s a historical site with an interesting story and you’ll see more photos than I can put in this post.  Learn more about it HERE. 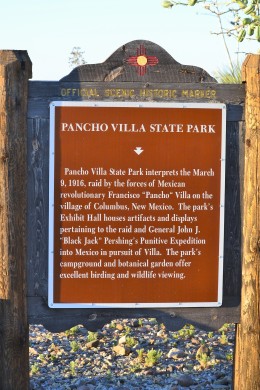 We are rousted by the park ranger from our second spot in the park (I had moved the van hoping to utilize a more east-to-west orientation to minimize the amount of sun hitting MissAdventure). He won’t allow us to be at an electrical site even though we are not using any electricity. We move to the perimeter, but it leaves a lot to be desired, although we do have a water spigot at our spot. The way the primitive sites are arranged there is no way to have the van oriented with the sun, east to west, and it’s getting even hotter. Two nights of this and I decide to head back to Deming, check on that stinking generator, then head back to City of Rocks. From here in Columbus that’s about 60 miles so maybe we can have a few degrees shaved off the daily highs of 98+. 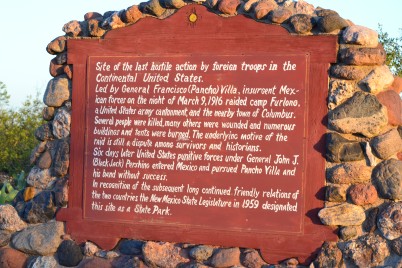 As I am breaking camp I glance over to the site across the road and can’t believe my eyes. There are two owls seeking shade under the canopy covering the picnic table. I inch back around the van and grab my camera. They are still there, and I grab a few shots.

Out of nowhere the wind does its thing and a sudden grab-your-hat gust of wind blows through and the owls disappear. I continue breaking camp, but I sure don’t remember those owls flying off very far, but they are gone. I wonder if they are in the tree next to the shade cover. I slowly and cautiously meander over toward the tree and discover that yes, they are in the tree. I get two shots, one of each owl, before they are spooked and fly off. Only one shot comes out. 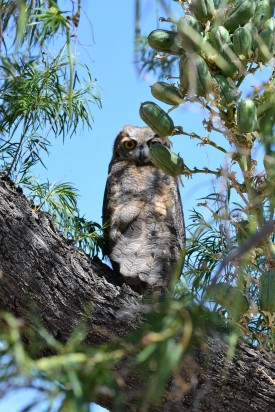 I finish loading up and we head back north to Deming where we will do the weekly thing: Supplies, ice, dog park, gas. I call MotoTech and speak with James. Cassie isn’t in yet, but he will have her call me. I try to call Westinghouse only to get a recording that “I have used up my allotted calls for the month.” WHAT THE HELL??? Excuse my French, but is this for real???
I am so angry at this point I . . . need to calm down. Evidently they have other customers who aren’t too happy with them as I am sure they didn’t install this little feature just for me. And if calling once a week to check on progress is too much, wellll, let me just say that I won’t be buying any more Westinghouse products. Ever. This is just the last straw. I fuss and fume my way through the weekly errands.
Just as we are ready to head north back to City of Rocks, I call Cassie who is the one who tells me that Westinghouse did not get the new generator shipped out last week as planned, that it will be going out today. A few hours later I receive a tracking number from the company. The generator is supposed to arrive this Friday, June 28th. Do I dare hold my breath?

Thanks for coming along on what has been a crazy six weeks. Not exactly what I thought our tour of New Mexico State Parks would be like, but it’s bound to get better. We have seen three very different, very pretty state parks. More than once it turns out, but it is what it is.  See you at City of Rocks AGAIN! Hugs, Shawna