We leave Evanston late in the morning, May 23rd, and head north on Wyoming’s HIGHWAY 89! It is a toss-up as to whether to go 189 or 89 ending up in Kemmerer or Cokeville. Considering we drove through Kemmerer late last summer — the mother store of JCPenney Company is located there along with James Cash Penney’s modest home, AND a dog park—I choose to head toward Cokeville, a name that for some reason sticks in my mind.
It’s still early in the day when we arrive at the junction the turn to the left to go to Cokeville, or turn right to go to Kemmerer. I want to see Fossil Butte National Monument so we hang a right and while the boys wait in the van (there’s that abuse again!) I enter the building along with two busloads of school kids to look at the impressive display of fossils.

The display is well worth the stop, but I decline the five mile loop drive through the area. It has a—GULP—17% grade to deal with. NO! Just no. It looks so benign, but I am not going to question it.  NO WAY! 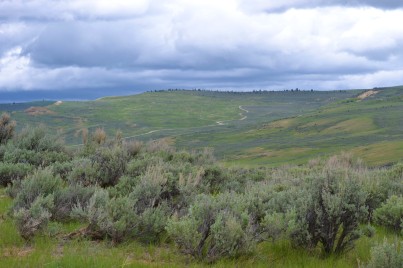 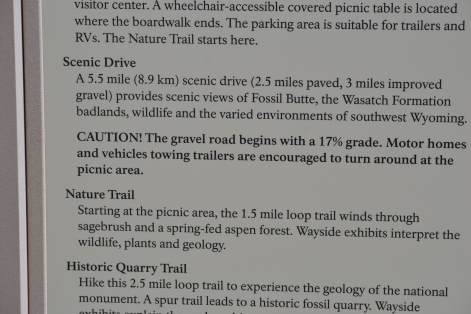 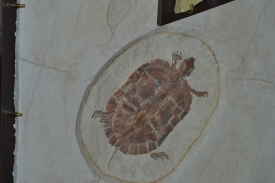 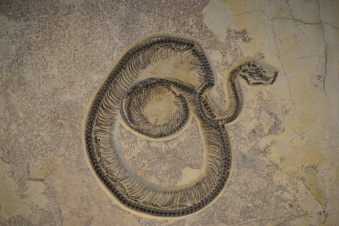 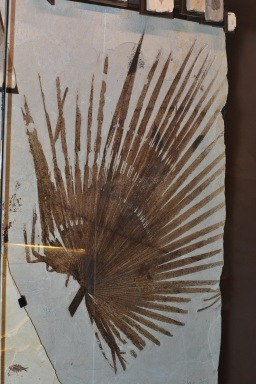 I consider going on into Kemmerer (Fossil Butte N.M. is on a connecting road that links 189 and 89) to let the boys run through the dog park, but decide not to burn the gas and put the extra miles on the van. They’ll get an extra long walk this evening.

We travel back toward the junction and head to Cokeville, a tiny town of about 500 plus residents. We go through some lovely ranching area, and make a quick stop at the Cokeville Wildlife Refuge. A walk out where there is a bench and a lovely view provides me with this great photo opportunity. Unbelievably, I hear the mournful cries of the rare
BOVINE!!!

What the … ??? *laughing* Not a bird in sight!! Information at the kiosk says the refuge has partnered with some of the ranchers in the area to make the refuge benefit not only wildlife but the livestock of the area as well. The ranchers provide water and plant various grasses that supposedly provides the area with what the wildlife needs to thrive.

Leaving the refuge I begin looking in earnest for the city park in Cokeville where one is allowed to “camp” for two nights. It’s pretty easy to find, the town being so small. It’s right in the town proper, right along—and I do mean right alongside—the very busy rail road tracks. I had intended on spending two nights, but I think one is all we will be able to handle.

The town’s people are very friendly and I did purchase a few items as a thank you for their hospitality, but we leave early the next morning.

I find a spot to stop alongside the highway to make lunch,

and I pull out the copy of the booklet on what to see and do in Southwest Wyoming I picked up at the visitor’s center in Evanston to read while I eat.

As I thumb through it I come to a very small article on Cokeville. Among this tiny town’s claim to fame is the informal title of “Sheep Capitol of the World” from around 1918 when the industry peaked here with the addition of railroad access, the robbery of the State Bank of Cokeville by the Whitney Brothers, early female political activism when a woman, Ethel Huckvale Stoner, was elected more than 80 years ago (elected to what it doesn’t say!). Cokeville is also known for a miracle that happened in 1986 when a duo consisting of two terrorists trying to blow up the elementary school with classes still in session ended up blowing up just themselves. THAT’S IT! This is why Cokeville rings a bell. I read the book several years ago, Witness to Miracles: The Cokeville Elementary School Bombing giving firsthand accounts of most of the residents who were involved in this terrible attempt to kill children and adults here. I will have to reread it, because most of it I can’t remember.
Hugs, Shawna