Friday, June 28th. Having gotten almost everything loaded up last night, we are up early. This isn’t unusual but actually it is a bit earlier than our normal routine. The dogs are put out on the lead to do their business while I gather items for a quick shower before leaving City of Rocks for the last time. The generator will be here today!

The shower feels marvelous, but what is going to feel even better is getting up into a higher elevation. This has been a tough few weeks dealing with ever increasing heat, but it is finally going to end, and I am excited.
We head to Deming where we pass the time waiting for FedEx to deliver the goods by checking supplies—we’re okay—getting ice and water, and a session at the dog park.
The boys romp while I visit with an elderly veteran. He and his wife settled in Deming a few years ago. He flew planes in Vietnam and had always wanted to become a commercial pilot after the war, but his eyesight was a smidge off and he was declined. Instead he bought a small plane and learned aerial acrobatics! He no longer has his plane, but keeps busy with his own two rescue dogs as well as volunteering at the local shelter. Another very interesting person.
The call from MotoTech comes in around 12:30. The genny has arrived, and we’re off to pick it up and be on our way to Las Cruces to get another problem solved.
It is very hot and quite humid in Las Cruces. As we are stopped at a red light I hear yelling and warnings to our right. I see a man with a gun. Oh shit. It takes a beat or two and hearing the words GET DOWN ON THE GROUND. DOWN ON THE GROUND NOW!! Before it registers that it is the law that has the gun, and as I am pulling up my camera two more vehicles, unmarked, pull in front of a black SUV with a very damaged front bumper and left fender. I get a nice shot of the unmarked’s.

The two gals they had on the ground were in tank tops and shorts. That pavement must have been broiling hot!!
NOTE: Later after getting another SIM card for the Mobely (internet hot spot) and getting it working once again we head over to Wally. I see a piece of a black bumper and a left fender just lying in the parking lot. Looks like this is where the black SUV got into trouble! Wish I knew the “rest of the story.”
Our next stop is Leasburg Dam State Park a bit north from Las Cruces. It’s an okay park and there is a Fort Seldon nearby to see, but one night here is all we do.

In the morning, I reorganize the back between my bed and the back doors to once again accommodate the generator. I’m thinking maybe we will do one more night in the now vacated spot that overlooks the river below, 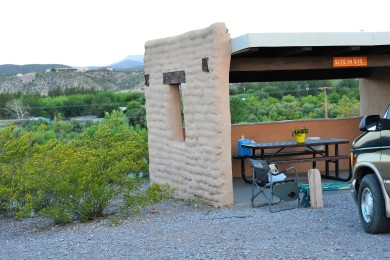 but go back to Plan A and we head out after spotting this guy crawling around the shade shelter in broad daylight.

Thanks for stopping by 2DogsTravel!  Hugs, Shawna