Quartzsite, Arizona, our winter refuge, is cool with lots of moisture; it is turning green.  Lush, spring grasses and plants put on a show that is beautiful in its simplicity.  One would not even notice if you hadn’t spent several winters here, or at least experienced a few of the winter months at some point.  Usually the greening of the desert is so brief it’s hard to imagine it even happens.  This year it happens. 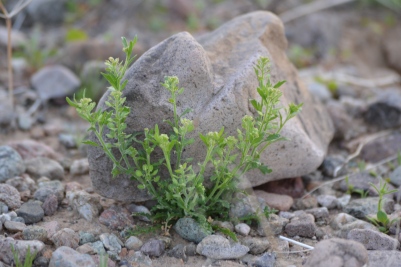 The spring flowers put on a colorful show and all of it with the “purple mountain majesty and the brilliant blue sky depending on the hour, is breathtaking.

There must be a lizard in here somewhere! 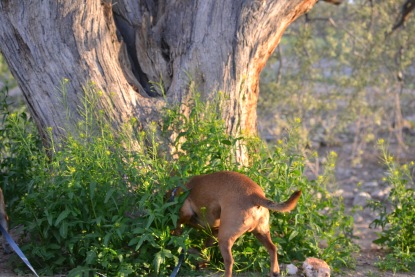 The middle of February brings unusual cold, even frosty temps, lots of cold wind and some rain.  Many hours spent inside reading, planning, writing.

The boys need a little walk a couple of times a day and I bundle up and take them out.  It’s cold enough that my little Fries doesn’t mind at all when we head back to the van.

They play, nap in the sun if it has made an appearance, and just generally go with flow.  On Occasion there’s a row, but for the most part they get along splendidly. Thanks for stopping by 2DogsTravel! Hugs, Shawna

We’ve had a cold spell in the desert. For about a week we have had some chilly weather with a cold wind reminding us that, after all, it IS winter. A couple of recent nights it’s been a teeth chattering 36-37 degrees inside the van when morning breaks.  I take the boys for their early a.m. potty break, heat some water for coffee, then jump back under the covers and wait for the sun to warm our vome through the windshield.

I have a heater, but have never used it. I tend to just ride it out rather than artificially heat up the inside of the van, because it’s too hard to cool it back down once the day wears on. That’s been my experience around Quartzsite anyway; it may change when we leave here and head north, but we’ll take it as it comes.

Last year, by mid-March, the temps were climbing into the 80’s. That is barely tolerable when you live in a tiny home made of metal.  When it hit 85 we left and headed north toward home in Cali. We no longer live in Cali, but we will be heading north seeking cooler weather once it turns too warm here in the southern Arizona desert. That may be sooner than we expect if the chatter at the dog park is correct.

With a general idea of what route we will travel, the goal is to end up in southern Utah for a meet-up with a couple of gals I met at the RTR.  The trick is going to be timing:  Staying out of the encroaching heat, but arriving in Utah early enough to still be able to take in Arches, Zion, Bryce Canyon before they, too, become too hot.

While biding our time waiting on the weather to send us scampering to get away from the heat we spend time at the Quartzsite Dog Park, rock hound on our morning and evening walks, and I do a lot of reading. Oh, and gazing at the barren mountain ranges, in this case the Plamosa Mountains, picking out shapes.  Do you see the lioness’ head?

CURRENT READ:  Beneath a Scarlett Sky. This is a good read, but for some reason it is taking me much longer than normal to finish it.  Perhaps because it’s another WWII story, and you know how heart wrenching those can be.

I spent the other day going through things in the storage area behind the bed sorting, tossing, and getting together a box of stuff to take to the Salvation Army. It’s an on-going process this continuing effort to get the vome cleared out of all the extras I brought along when we started our new life’s adventure of full-time traveling.

Ever being one not to waste anything or have to replace things I had extras of and brought with us to use up,  we’ve lived kind of crowded. Regular sorting, tossing, donating is needed to keep things organized as we rid the vome of stuff.  This last batch of unneeded items that went to the Salvation Army has gotten us to a I-can-see-the-finish-line place and the quest for having just what we need and not much more than that.  The goal of eventually having a place for everything and everything in it’s place is closer! Yippee!!! 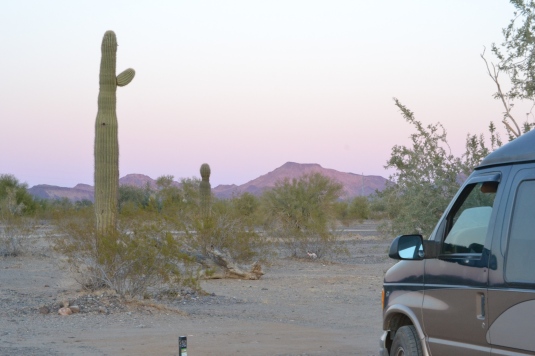 Our spot in Scaddan Wash.

Until next time, Hugs Shawna

The Rubber Tramp Rendezvous, held each January on BLM land at Scaddan Wash,  is history for this year. Met some new friends, couldn’t find some I have been looking forward to meeting, and Charlie got us kicked out of one of the seminars.

He just couldn’t keep his barker quiet when other dogs were saying hello.  Charlie did, however, learn some better behavior in an all around sense so it was a very good experience for him and a relief for me.  He IS learning!!

The RTR is growing by leaps and bounds every year. From around 50 or 60 people just a few years ago to about 1200 last year, this year it was anticipated that the attendance would be so big that Bob Wells, the host and expert on van dwelling as he has been doing this for years, was required by BLM to bring in porta-potties for this year’s gathering. The unofficial count was over 3000 attendees, and I believe it.

Compared to last year when I arrived a couple of days early to try and find a bit of shade there were FOUR vehicles. This year my  early arrival found what looked like a vehicle beside every bush! Except for a very few scoundrels, and there are those in every crowd, it was a well-behaved, respectful group.  Bob had the areas layed out into sections for Main Camp and Meeting Area, a section for the music crowd, a section for the disabled, a section for the larger vehicles.  Two seminars, sometimes three, were held each day of the two week event. At the end a women’s gathering was held.

Having been under constant stimulation from so many people and dogs, vehicles coming and going constantly, and the general noise of so many gathered in one place the boys needed some peace and quiet and I needed relief from the dust so we did not stay for the women’s event.

I met many wonderful people, but clicked with a couple of really nice gals, Peggy and Mary, and we have tentatively made plans to meet up again perhaps in Utah when it’s time to move north to escape the heat here in Arizona. Peg had to leave a bit early and get back to her job, but Mary and I gathered around the campfire every night and took a few walks. YES, she gets all that stuff in her Prius!!! 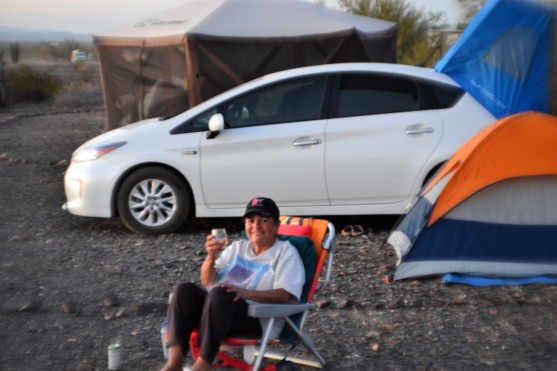 One of those walks was to search for the labyrinth that was somewhere near the camps.  We headed out to where we thought they were located and 45 minutes later while giving it up discovered the thing was right across the wash from Freedom!!

Freedom is just to left of us across the wash!

Thanks, as always, for stopping by 2DogsTravel!