November sure has whizzed by.  The Chiweenie Brothers and I made it to Arizona, spent a couple of nights at Craggy Wash in Lake Havasu where some guy tried to roust us from our spot beside a nice shade tree by whining about how this was the third time he’s lost out on this spot and HE needed shade­­­—like we didn’t!—and when I refused to give it up  he hopped in his rig and peeled out spraying us with small rocks and dirt!

When we left a couple of days later I got the tires rotated on MisAdventure, and then we spent some time at the SARA dog park. SARA Park has much to offer besides a wonderful dog park: Hiking and biking trails, an equestrian area, and more.

We move on to Parker where we spend one night off Hwy 62.  Last year’s camping area is inaccessible. Not sure if it was due to flash flooding or just the fact the road has been graded, but nothing looks familiar and I can’t find a spot with shade. One night here and we move on. Q (Quartzsite) here we come!

I drive straight into town, get ice and fill up the generator (I love being able to use my Instant Pot!!) then head to the dog park.  Big surprise here.  The “Big Dog” side is closed for some unexplained reason and all are using the “Small Dog” side.  It isn’t working too well as the big dogs have pretty much taken over and there are plenty of little dogs that don’t like being in with them.  But, it is what it is. We will either spend more time in other areas of La Paz County or we can change our preferred time to be at this dog park to later in the afternoon. We’ll work it out!

Once the boys are ready to leave the dog park I drive to the library and try to get a blog post done.  I no longer have mobile internet as ATT said I used too many roaming hours and they cut me off everywhere there is no ATT cell tower.  Hmph!  This may be a long winter with fewer posts. Not surprisingly I still have to pay until my contract is up so I won’t be getting anything different at this time. Again … It is what it is.  I’ll work it out!

Meanwhile, out in the desert we settle onto BLM land with a sweet, shady spot at the Hi Jolly 14-day area.  Long walks with the boys in the chilly air of morning, some reading, checking email­­­—fortunately I can get my email and get onto the internet with my phone, but no way can I do a blog post from it— and I am able to make an appointment with my dentist in Los Algadones. But, before that happens we will head to Bouse and stay a night or two.  The boys will get to romp in the HUGE dog park there, I will get veggies from the truck that brings in produce fresh from the fields, and I will also attend a get-together with the Bouse Genies, the local genealogy group.

This trip to our wintering grounds has brought some frustration, yes, but there has been blessings, too:  Lying in bed one night with the back doors open I watch the space station glide silently through the night sky.  Early mornings, before sunrise, I watch Venus hanging huge and glittering, low in the east as day tries to make her disappear for another 24 hours, Sun demanding her time in the sky. One morning Venus was next to the quarter moon; so beautiful!

Some mornings Sun brushes past the distant mountains with a silent but huge burst of light, other mornings she makes a magnificent entry wearing a cloak of the softest pinks and lavenders or bright red and gold if she’s feeling brassy.

Coyotes howl across the desert.  I do consider this a blessing, although it’s not much fun when they come in close trying to trick The Chiweenie Brothers into coming out to play which they did three nights running at one point.  Sends a chill up my spine.

Gorgeous sunsets and sunrises.  They make my heart sing in their beauty.

Thank you for stopping by 2DogsTravel. We appreciate you coming along on our adventures, and appreciate your patience while we get through this little internet glitch. Hugs, Shawna

From Yuma we traveled 95 north to Quartzsite, “Q” to the locals and most snowbirds, and spent a few nights in the BLM boondocking area called Hi Jolly. I did errands from there: picked up mail, bought supplies, took the boys to the dog park.  Little stinkers can sure figure out where we are headed and they begin play inside the van in prep for the park.  You know, get those muscle warmed up!

Once we got all the necessary things taken care of and put in a few days of doing nothing but catching up on rest–not the Chiweenie Brothers, they are always ready to rumble, but I needed it–we went out exploring a bit, taking in some of the sights and places we didn’t get to last year.  Between those excursions and the things I needed to get done for Christmas and the December birthdays for family back in Cali, the month flew by.  And here it is 2018!  Let’s make it a happy one!

The best place to start with sharing our exploration in Q is with where it all started, and with the man who’s nickname lives on in this little town in the Sonoran Desert.

According to the Quartzsite Visitor’s Guide, the Hi Jolly Pioneer Cemetery is the most visited location in Q. It centers around the man, Hi Jolly, and some camels. Here’s what transpired to give Q some of its unique personality.  It all started with a camel driver.

It began in 1855 when Jefferson Davis, secretary of war and later president of the Confederacy, was sold on the  idea of importing camels to use building the wagon road through the Southwest.  They needed men who spoke camel, and the famed camel driver, Philip Tedro, a Greek born in Syria was contacted. Tedro had made a pilgrimage to Mecca, converted to Islam and his first name became Hadji Ali.

Camels can carry two to three times as much as a mule and can go without water much longer than mules and horses, and they were a great success.

Then the Civil War started, and Jefferson Davis changed jobs; without his support the project was abandoned. Some camels were sold, others had escaped out into the desert.

Hi Jolly bought a couple of them and for two years ran a freight route between the Colorado River and the mining towns in eastern Arizona.

Hi Jolly became a citizen of the United States in 1880, married Gertrudis Serna of Tucson, and when he retired moved to Quartzsite and prospected around the region until he died in 1902.

The escaped camels thrived for a while, but eventually they died out. However, as late as the 1930s and ’40s  unsubstantiated reports were made of seeing camels in the wild.  One sighting in particular, the story goes, was of the Red Camel, spotted with a headless human skeleton on its back …

You can visit the cemetery with it’s monument tribute to the camel driver, Hi Jolly, at the Hi Jolly Pioneer Cemetery on the west side of town. 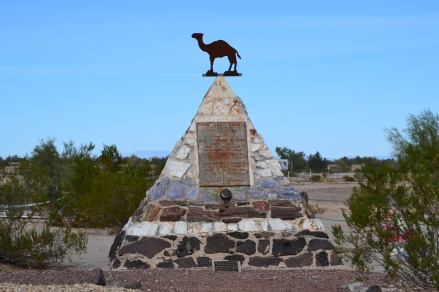 Thanks for stopping by 2Dogs!  Have a HAPPY NEW YEAR!!!  Hugs, Shawna