It’s a clear but cold and windy day as we make our way to the state park that is the ghost town of Bodie.  Paved road save for the last 3 miles that are very rough, but it’s well worth the trip.

The boys are not happy that I am leaving them in the van even though dogs are allowed here, on leash, but I want to take photos and make them good ones.  In reality, Fries would not like being in the cold wind, but he doesn’t understand that.  A quick walk about for them to relieve themselves drives the point home and he is more than happy to get back inside the van. Charlie B just goes with the flow.

Fire burned a majority of the town on three different occasions through the years. The one during the Great Depression was started by a young boy attending a birthday party who was angry because he wanted birthday cake and was served green jello instead.  He got hold of a box of matches, went outside and began lighting them to catch the tarpaper on the house on fire.

Although they had a piped water system in the town, maintenance had not been done and the pipes were plugged.  A bucket brigade might have gotten the fire under control, but either no one thought of it, or many were “under the influence” and not thinking clearly.

If you would like to read more about Bodie, please do so https://www.bodie.com/  .

Thanks for stopping by 2Dogs!  Hugs, Shawna

We’re up early on September 27 and begin our journey inland.  It’s a beautiful sunny day and after picking up a coffee at McD’s  we take 199 heading east into Jedediah Smith State Park.

It’s shady and cool here. We park and take a lovely mile long loop on one of the walking trails. I’ve seen the redwoods many times in several different places along the California coast, but I never get tired of being amongst these giants. 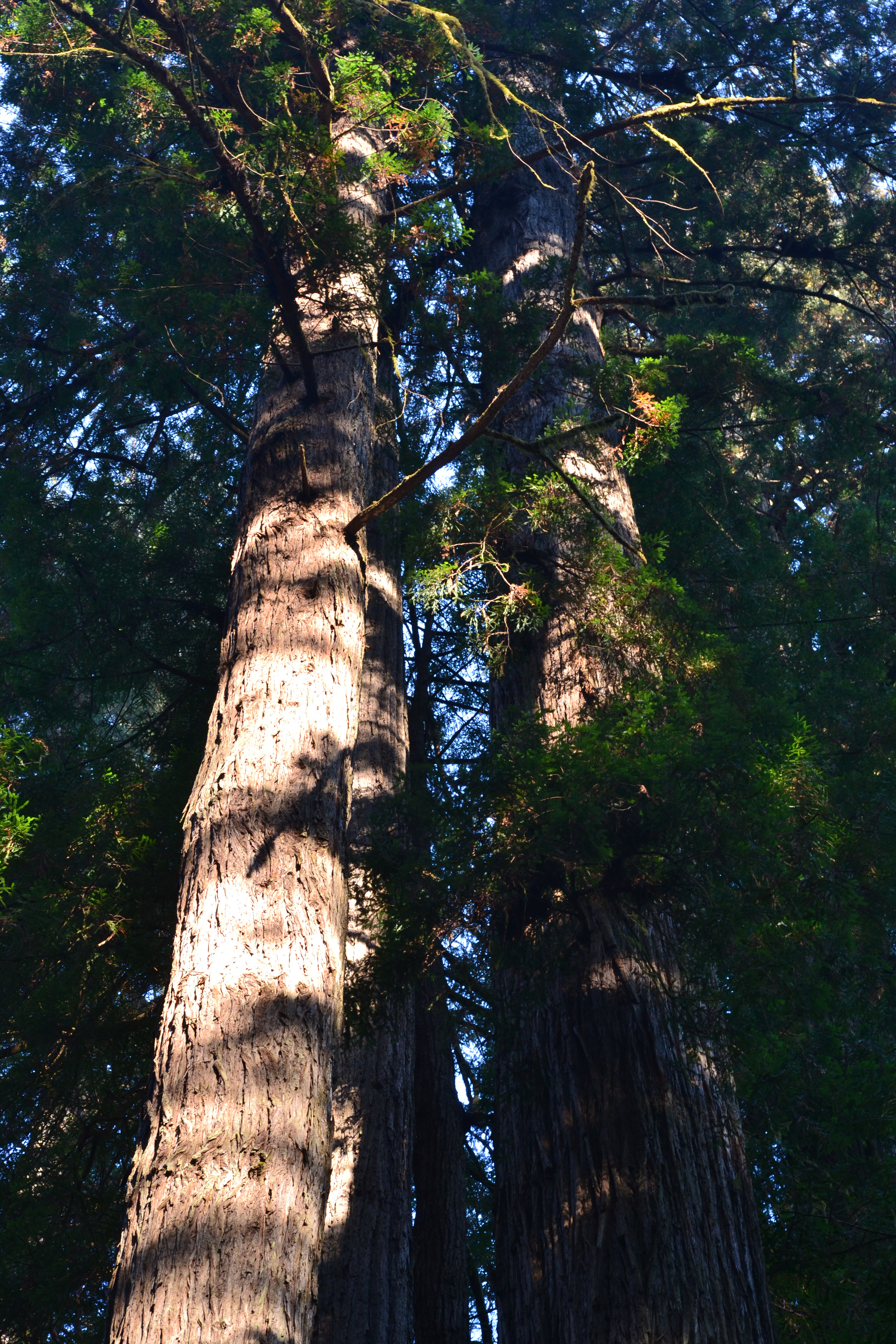 The Chiweenie Brothers explore the lush green ferns and other delights along the path and we stop so they can check out the cavity in one of the trees. 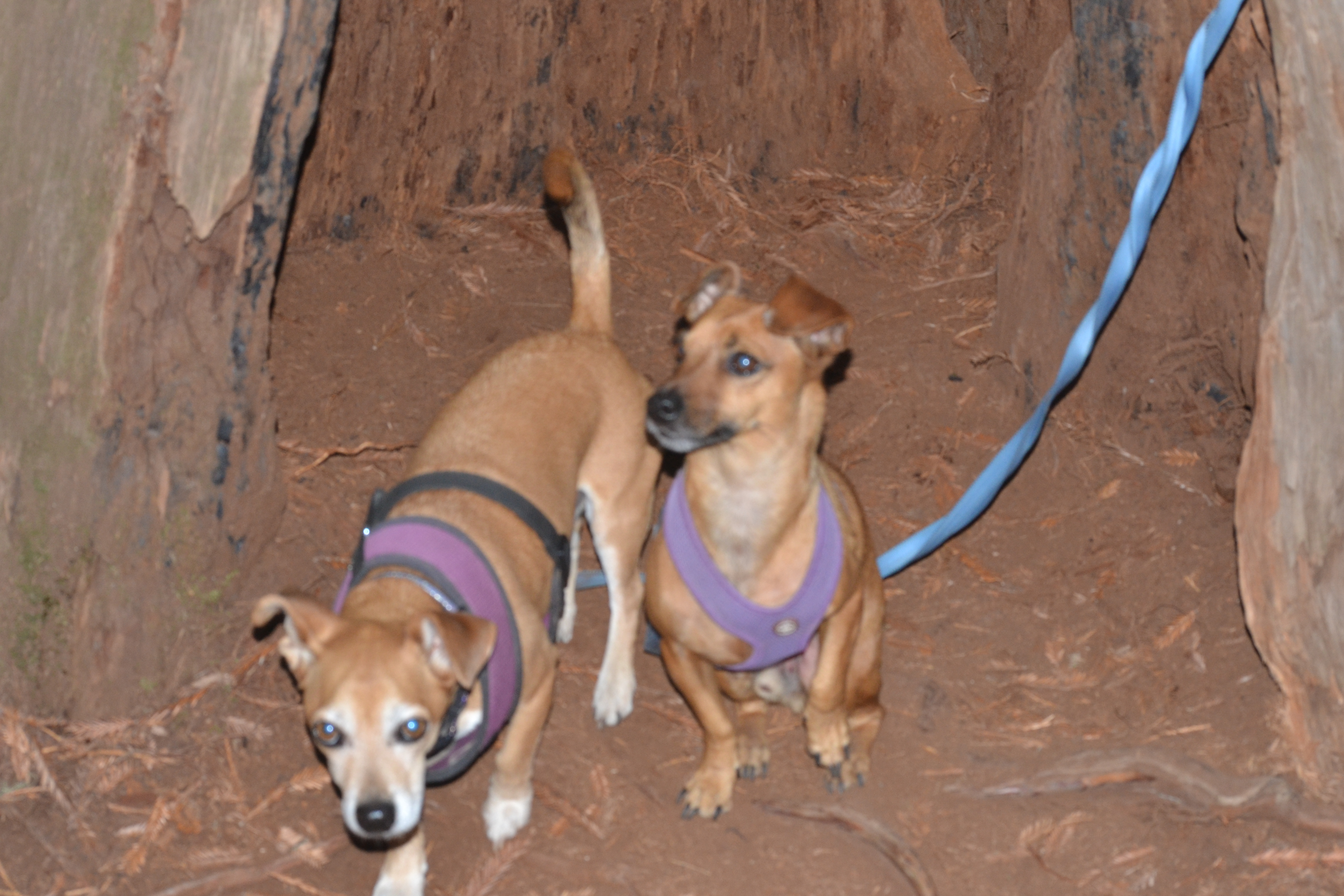 Once our walk is done we head out on Hwy 199 and back into Oregon.   I am like a horse headed to the barn;  we’re back on the road.

This highway is a narrow two-lane curvy mountain road, but at least it has guardrails.  We eventually gain better highway and level road. We make a quick stop at a potential campground for the future–of which I cannot remember the name–and Charlie, spying movement near the rest rooms, goes into lizard hunting mode.

Load up boys. We need to keep moving.

What was to be a quick stop in Grants Pass for fuel turns into a test in patience.  Fred Meyers has the cheapest fuel in town and I definitely want to fill up before I get into Cali.  Ol’ Murphy is at it again and not only is there is HUGE line of fellow travelers waiting to fuel up, the pump I eventually get to park beside has something wrong with it.  Ten minutes in line waiting, then we get the pump that is only trickling in fuel.  Another 25 minutes waiting for the tank to fill and we are finally back on the road.

It’s freeway time folks, and we sail along I-5 to Ashland where we spend some time in a rest area that won’t allow an overnight.  I am weary, it’s been a long day and the heat and smoke inland has me needing to stop for a while.  I find some shade and we rest a bit.

I realize the day is waning and I need to make a decision.  There is parking for trucks on top of Siskiyou Mountain so if nothing is found between here and there that’s where we will stay. Fortunately the very next rest area allows overnights so we shut her down there and will head on in the morning.  It will be nice to get out of the smoke!  I don’t know how those in the valley around Redding dealt with smoke from the Carr Fire for over TWO MONTHS.  It was said that being out in it was like smoking a pack and half of cigarettes a day!  Not sure where the smoke here is coming from, but it isn’t nearly as bad as it could be, but it still makes my head and sinuses hurt. Goodnight! Hugs, Shawna