I did not get several posts scheduled like I had planned before we left the Deming area.

The generator finally arrived on June 28th, but by that time I had a touch of heat exhaustion, and it was all I could do to get packed up, get the genny and get to Las Cruces to get another sim card for my Mobely.

While waiting in traffic in Las Cruces I witnessed the take down of two gals, ordered out of their big SUV and ordered onto the ground—-oh that hot pavement!—-while several more unmarked vehicles pulled up, officers jumping out with guns drawn. Good thing I was going to ATT and not Verizon (this all went down in Verizon’s parking lot) or I would have been right in the thick of things. Too close as it was!!

So this leaves us with fingers crossed that the next big town, Truth or Consequences, will have a tower, or a library with shady parking. We still have ice so we are staying put until we have to go get some. The humidity is lessening and we have some nice shade to recover in. We need this respite.

We leave you with these photos, taken with my phone. Fries in a hole at the dog park in Deming. He had got bitten by a bug or bee or stepped on something and came limping over to where I was seated. He would not allow me to even touch his paw, but he found this hole behind the bench, made it his own and stayed in it until he felt better.

When we got back to the van Charlie, worn completely out, took a nap and commenting on the weather! Thank you for your understanding in our current situation. We’ll be caught up soon. And I’ll just warn you, we revisited two of the parks and drove to a new one before we got the call that the generator had arrived, but they are great parks and there is new stuff to see!

Hugs, Shawna and The Chiweenie Brothers

Just on the other side of these rocks we discover not one, but two Arizona white oak trees that offer some wonderful shade. We do get late afternoon sun, but it is not nearly as bad as yesterday’s camp. 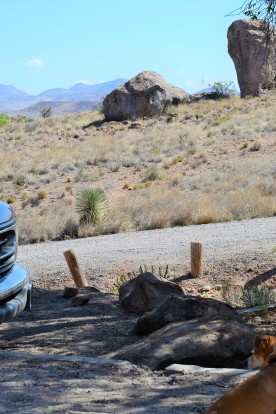 It’s several degrees cooler here at City of Rocks than it is at Rock Hound. Between the lower temps, some shade, keeping the windshield covered, and side and back doors open we get the benefit of every little breeze. If the breeze dies down—and that’s not often—there is more than enough sunshine to keep the solar panel working at storing energy in the house battery to keep electronics charged and our 12 volt fan running. It’s lovely!
The Chiweenie Brothers and I take a walk every morning before the sun comes up then it’s back to MissAdventure for breakfast and coffee taken in the open air of our beautiful camp.

We will be staying her for two weeks or until the generator is fixed, whichever comes first. In any case there’s a lot of exploring to do here.

Thanks for stopping by 2DogsTravel! Hugs, Shawna

What’s in the night sky? June’s planets: JUPITER—at opposition—will be bright in the sky from dusk to dawn. SATURN can be seen from mid-evening until dawn, and VENUS appears for a bit in the dawn. Around mid-month MERCURY and MARS will give us the closest conjunction of two planets during the year.

Saturday, June 1, 2019 The Chiweenie Brothers and I leave Rock Hound State Park for City of Rocks State Park about 30 miles north near Faywood, New Mexico. It’s a strangely beautiful park sitting out in the middle of the desert, huge rocks two plus stories high looking like they were just deposited there by some giant playing some form of stack-the-rocks game. As the brochure says, it’s a geological wonder! And because it is far from any town or village, the night sky is spectacular. The view from the highway coming into the park.  It’s a b bit deceiving.
The visitor center offers this beautiful vista, beautiful cactus with a far-reaching vista behind.

This geological wonder was born from a volcanic eruption that was 1000 times stronger than the eruption at Mt. St. Helens. Wind, rain, and probably dust storms has formed these rocks into the shapes we see today 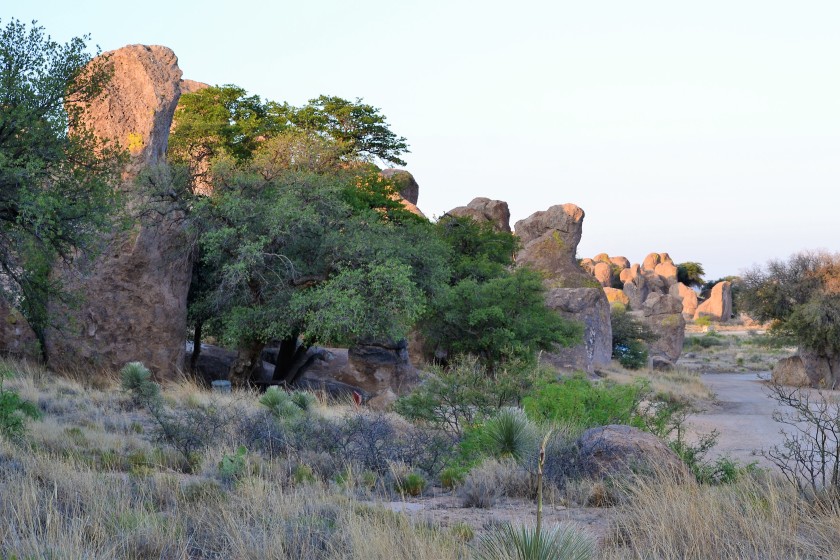 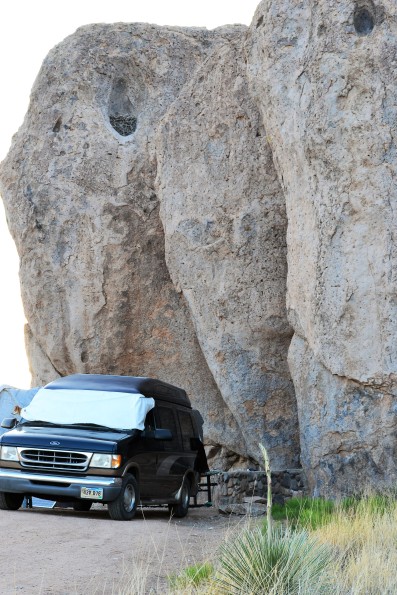 Come morning we were still around, but decided to search for shade. This is a beautiful spot until early afternoon, then the sun shines down unmercifully.

This nest is built in a bowl worn into the rock face. 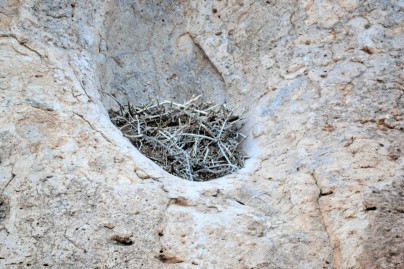 Our view to the south of camp #1 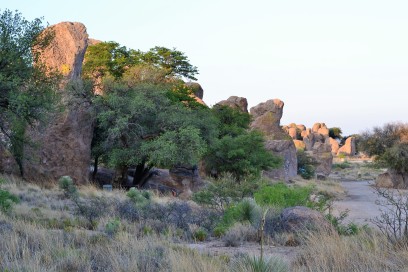 Thanks for stopping by! Hugs

On Monday, Memorial Day, May 27th, I secure camp chairs and remove the windshield cover that stayed on the windshield all night. That’s a win! I gather water jugs and shower items and we motor down to the center of the park where I fill our containers with potable water and then leave the boys in the van while I shower. The shower rooms are immaculate in this park. Immaculate.

We get in our walk and then back in camp I putter around, do some cleaning, and check maps for our next destination.

The sun begins her afternoon warmup, and The Chiweenie Brothers wait patiently

as I begin breaking camp in anticipation of heading north tomorrow morning: Solar panel unplugged and put in its spot in the back between the bed and the back doors. Chairs stored in its spot between the boys’ front platform and the passenger door, table cloth (a twin fitted sheet) pulled off and put away, and lastly dog stakes and tie outs brought inside along with two little dogs getting excited. They know what this means; new places to explore!!

The windshield cover stays on until morning, but for all intents and purposes we will be ready to head into town at first light. Itinerary: Walmart, Dog Park, Library, then stop by and hopefully pick up a now-running generator, and then we’re off to our next park.

Thanks for stopping by! Hugs from the 2Dogs Crew and me. 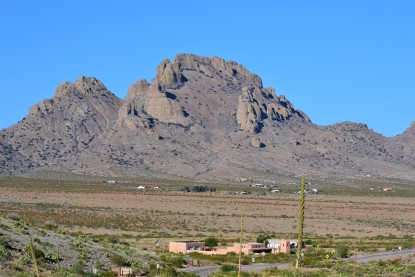 CURRENT READ: True Places by Sonja Yoerg. The basis for this book, a girl who has been living in the woods alone is rescued by a woman from the city just seems pretty implausible, but this author is a good writer. It might surprise me as I get farther into it.

As ol’ Murphy can’t help himself and must pay a visit, I find my generator will not start after it runs out of gas while cooking my dinner on Thursday night. I filled it with fuel and pulled the cord to get it started, but it wouldn’t budge, not even a bit. Frustrated, I take the side cover off. Peering into the inside of the machine it is apparent this is something I won’t be able to handle.
Off we go early Friday to find a mechanic, and Deming being the friendly, helpful town that it is we are soon given the address of a local moto cross fella that works on small engines. He pokes around and satisfies himself that it isn’t the sparkplug or something else easily replaced and tells me he will give me a call Tuesday morning. Oh yeah, of course this is a holiday weekend, and I can see Murphy smirking.

The Chiweenie Brothers and I take lots of walks, Charlie looking for lizards, me looking for rattlers, Fries just happy to be out and about. We actually do find a rattlesnake crossing the road just past the visitor’s center on this morning’s walk after our trip to town, and we take a wide berth.
Once back at the van and settled in to do some reading to get out of the wind that is beginning to blow, Charlie spots this cute guy

And later this fella capturing his evening meal. 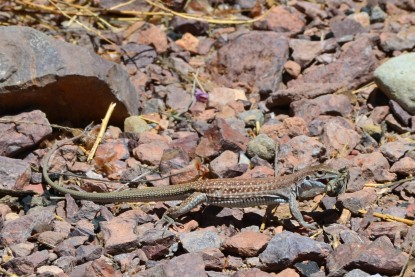 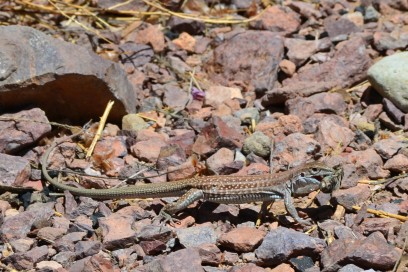 Sunday we just get our walk in and are back at the van when the wind kicks up as it seems to do every day about mid-morning. Really kicks up. It is soon blowing so hard the side doors will not stay open and the windshield cover keeps coming loose and flipping up over the roof. In the distance the dust is beginning to whirl and it isn’t long before the Little Florida Mountains are obscured by the swirling dirt.

I scurry around closing windows, the back doors, and get the Chiweenie Brothers out for a quick potty break then it’s back inside and the side doors are closed. As morning fades and early afternoon shows up the temperature begins to rise. It gets to the upper 80s and it becomes very uncomfortable in the van with windows and doors closed. Totally tolerable when one can open the doors and windows; almost unbearable with it is closed up. The hours drag. Every half hour or so I crack open the side door for a bit to get a bit of fresh air inside. I can feel the grit in the air.
By early evening the dust settles and the winds quiet a bit, but still makes its presence known and probably will through the night. We can now leave windows and the side door open. The cooler evening air is heavenly.
Thanks for coming along! Hugs, Shawna

CURRENT READ: The Great Alone by Kristin Hannah. This book sometimes reads like a teen’s novel, but it isn’t a bad book.

Nature never deceives us; it is always we who deceive ourselves. —Jean-Jacques Rousseau

Thursday the 23rd of May we head out early. A coffee at McDonalds, the boys pushing in close in case I order a sausage McMuffin—I don’t—and I catch I-10 (Freeway! UGH!) to Deming NM where I search for the dog park.
We find it pretty easily, and it is a beauty. No less than eleven mature shade trees, mulberry and juniper, make the small dog side a shady oasis. The big dog side looks equally as shady. Having it all to themselves this early in the morning, The Chiweenie Brothers run full tilt until they can run no more.

With two exhausted wiener dogs napping, I hit Wally for supplies, and then drive the short distance to Rock Hound State Park where I purchase a New Mexico State Parks Pass good for an entire year of camping, up to two weeks at a time, in their parks’ primitive campsites. Primitive being tables with shade covers, fire rings, and a garbage can. Water is available and showers, too. All for the sum of only $225 . Did I mention this is for an entire year? *smiles*.

So there it is, our summer adventure: Exploring New Mexico’s state parks! So glad you are coming along for the trip! Hugs, Shawna