Skip to content
Hi!  Welcome back to Two Dogs.

I really didn’t want to post this because I think the picture is awful, but I do want to assure you, the cube cooler cover turned out much better than this photo shows.  In my defense, the cube cooler is square (which is good), but the lid has rounded, beveled edges (which isn’t good if you are trying to cover it) and that was not easy to work with.  The fabric color is a bit drab, too, but I really didn’t want it to stand out, and as long as it covers the Reflectix that will be added to the outside it will function as wanted and I am not going to worry about it. Later I may do a few alterations, but at this point there are so many more important things to worry about like downsizing my household goods and getting rid of stuff.

Yes, the downsizing is underway and it’s coming right along.  There have been moments when I wanted to sit down a bawl, asking myself “What in the world are you DOING?”  and then other times when it isn’t going fast enough.  Forgive me if I have mentioned this before, but this is my life right now.  And it’s emotional. As I post another item in the local swap and trade Facebook site, I have noticed that I generally price things very reasonably, however, if it is something that means something to me, the price goes up.  🙂   Oh yes, this process is very emotional indeed. But it’s progressing, and it’s one of the reasons I haven’t been posting much lately on the progress toward readying Freedom for the Big Adventure. 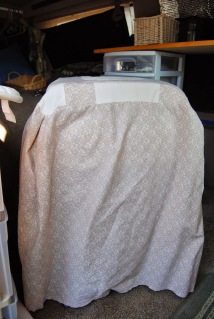 Sooooo,  it went from this (top photo) to that (bottom photo)  with the addition of a square of cardboard covered with Reflectix.  I hate the way the pleats hang, but that’s for another day when I want to take the time to prettify it. 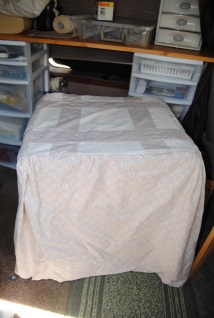 Once I got the decorative — and I use that word very loosely — cover figured out, I spent an afternoon this past week working on ideas for keeping my cooler, well…..cooler.  Not only did I line it inside with Reflectix, 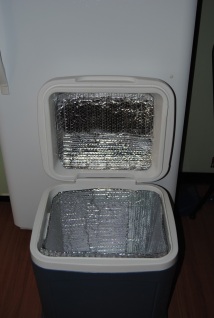 but I also made a “floating” lid for the inside.  It’s made from two pieces of foam board glued together.  I will cover it with Reflectix when I get some more. The idea is that as the food and ice deplete the floating cover will move downward to keep the cool air closer to the perishables.  At least this is the idea.  Haven’t tried it yet, but soon, Grasshopper, soon. 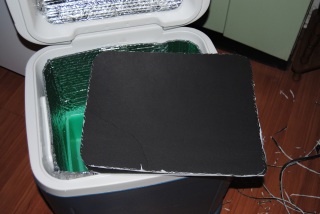 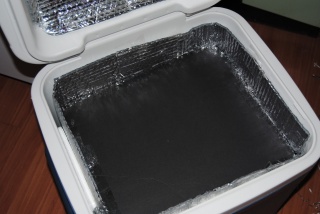 As the volume of the contents decrease the air space on top of the floating lid will increase, of course, and I will put something along the lines of a blanket, coat, or sweatshirt to take up that space while also providing for more  insulation properties, AND a bit more storage space for a rarely used clothing item or two. whatever I use, it will be kept in a plastic bag, so no worries about contaminating food.  😉

The next part of this project, besides a test run, is to line the outside of the cube cooler with Reflectix.

That’s it for today folks.  Thanks for stopping by Two Dogs.  The Chiweenie Brothers and I appreciate your interest, and Burger says hi.   Hugs, Shawna